The crime reports for April are below. We were running about average for the month, but way below the level of crime this month last year. Spring is usually prime time for thieves and burglars so its good to see we’re doing better than last year. But please don’t let your guard down, there are still bad guys that target our area, so as tempting as it may be to leave your doors and windows open on a nice spring day, be aware that these guys will still take advantage of the opportunity, even if you are at home.

Burglar Caught
Last month I told you about a series of burglaries with a similar MO: breaking in through a rear window, often a bathroom window and stealing jewelry or electronics but leaving other seemingly more valuable things behind. Although these incidents have occurred in different parts of the neighborhood, there was a short string of them in the 5800/5900 blocks of Martel and Revere which we are fairly sure are connected. I what I hope is good news, police have arrested a suspect in an incident on Mercedes which matches this MO exactly. They’ve asked me not to release specifics since they are still interviewing victims and witnesses on other cases and releasing it might compromise the prosecution. However, I can tell you he is a mid-twenties career criminal who has been arrested 39 times already and served time for burglary. (Do the math on that…) This is a very average white guy who blends in well and looks much like any other resident in the neighborhood. He is a thin guy with blue eyes and dirty blond hair but sometimes has it shaved off. I’ll follow this arrest to see what happens. If you have been the victim of a burglary recently, you may be contacted by DPD for more information. Please return the call if so.

Lowest Greenville PD Update
The Lowest Greenville PD passed a few months ago, requiring businesses who want to stay open past midnight to get a special use permit from the city. Our hopes is to thin the number of bad actors generating crime south of Belmont. The first few applications are beginning to come in. LGNA is working in tandem with the 5 other Neighborhood Association in the area and with DPD to address each of the applications as they come in. This is something of an overwhelming job, but we will be putting in a good word for the good guys and putting our foot down with the bad guys. So far, the “most wanted” have not done anything to change the way they do business and continue to operate irresponsibly. None of that group has applied for their SUP, so we suspect they will simply go away. 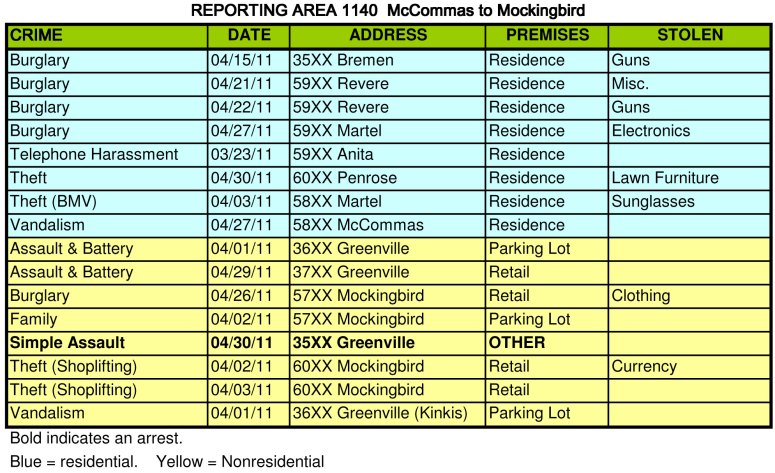